♦ High precision, high stability, good output symmetry
♦ It is used to measure the force acting on a fastener or shaft, such as a bolt or in a hydraulic press.

Load Cell Central's through hole load cells, often referred to as donut load cells or load washers, are typically used to measure the force acting on a fastener or shaft, such as a bolt or in a hydraulic press. It also offer high accuracy and high stiffness. The standard models can be modified or customized to meet your requirements. 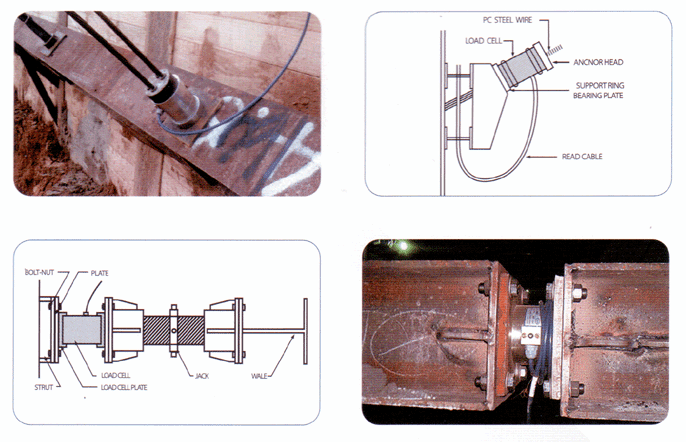 1. Prolonged Monitoring changes in loads on anchor by excavation.

2. Measuring the temporary tension in cable installed part of bridges.

3. Checking the stability and evaluating the effectiveness of support system such as retaining wall, earth anchor.

5. Made as High Strength waterproof type and well-used for file test.

1. When installing in Earth Anchor, process the wale in advance according to Load Cell standard.

(To prevent Flange of wale and strain of Web, you should install Stiffener.)

2. Connect the Cable and then record zero using measuring instruments.

3. Place bottom loading plate, load cell, top loading plate and distribution plate in order on the Processed wale to be

At this point, note that Anchor line should not reach to the wale or cell.

At this point, note that eccentric should not be on Load Cell, to minimize the loss of Prestress,

5. When pulling, measure the stretched amount and check the status of Earth Anchor by comparing with the planned amount