Recently, garbage sorting has become a hot topic. The classification of recyclable waste such as plastics, glass and paper is a work that people don't mind handing over to artificial intelligence. These robots can intelligently classify different materials and types of garbage through built-in sensor components. Recently, a company in Florida, USA plans to add another eight garbage sorting robots based on the existing six robots. With the help of these machines, the recycling operation will be able to achieve most of the automation.

Among them, the image database contains various states of these recyclables intact, dents, and crushed. Vision sensors use computer vision to scan fast-moving objects, distinguishing objects by color, texture, shape, size, and material. The attachment of the robot uses the suction cup to grab the item from the conveyor belt and throw it into the corresponding garbage collection bin.

Currently, 24 similar systems are deployed in the United States. It is expected that this number will double by the end of this year. Robot developers are also racing to develop next-generation recycling technologies: sorting paper and other two-dimensional objects on crowded conveyors.

In April 2019, the company deployed an upgraded sorting paper robot that improved the ability to identify overlapping paper, partially visible paper, and plastic. The robotic product was also upgraded in May this year. This dual-function robot, guided by the artificial intelligence "brain", is able to detect more areas and recognize overlapping papers on fast moving belts.

At present, there are 19 street townships in Chaoyang District of Beijing, which have created garbage classification demonstration zones, 1055 districts to carry out waste classification, and 7 terminal treatment facilities. Is the garbage already distributed, will it be remixed and mixed during transportation?

It is understood that the south side of Shuangjingqiao East Road is the location of the closed garbage building. It is responsible for the collection and transfer of garbage from Jinsong and Shuangjing areas, 28 tons of domestic garbage and 5 tons of kitchen waste. There are three domestic garbage sorting and compression equipments in the garbage building, one of which is green and the others are gray, which is consistent with the color of the classified trash in the community. 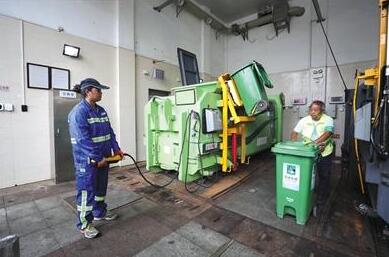